I am sure I will be moved to the top of the government “watch list” after writing about my first gun! Humor aside –

I was eight years old and my father had bought a Daisy BB gun for me when I was seven. My mother had forbidden him to give it to me until I was at least ten! My dad wore the pants in the family and compromised and gave it to me with 500 BB’s on my eighth birthday! I shot it for years till I wore it out! I still have one BB in my hand to this day – lesson learned. That was my first BB gun! I received a Marlin 22 when I was ten years old and an Ithaca 12 gauge when I was twelve! (My father had me buy the Ithaca Featherlight from my Uncle Tom for $50 dollars to teach me guns cost money.)

But my grandfather Kalman paved the way for my BB gun by making me a wooden gun when I was six! I had been reading about cowboys and Indians and I just had to have a derringer. My grandfather, pipe in hand, gave me a piece of plywood to draw my derringer on so he could cut it out. I remember the smell of fresh cut wood mixed with apple pipe smoke. Finished, he chased me off to play with the other Hungarian kids in the neighborhood. I still have my derringer 43 years later along with another gun he cut from scrap for a neighbor kid. 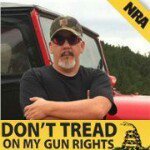 school, the grocery store, Ponderosa Steak House (and ya wonder why I like the nickname Hoss). I loved that little gun but I had been raised to respect guns. Our home was full of hunting rifles, pistols from WW2 complete with swastikas and a history. I was raised to respect guns, beer, my parents, and above all God.

I am a think outside / act outside the box kinda guy! View all posts by Hoss

A Reader's Guide to Orthodox Icons